Offshore Oil and Gas (O&G) exploration and production has been cycling from cradle to grave for over 100 years, spanning many generations of marine fauna. Despite global occurrence of offshore infrastructure, implications of their presence for apex predators, including cetaceans, is under-studied. We analyzed data from autonomous underwater passive-echolocation-click detectors (C-PODs) deployed at an offshore […]

Marine Pollution Bulletin, 179, 113667 (2022)DOI: https://doi.org/10.1016/j.marpolbul.2022.113667 There is an urgent need to understand how organisms respond to multiple, potentially interacting drivers in today’s world. The effects of the pollutants anthropogenic sound (pile driving sound playbacks) and waterborne cadmium were investigated across multiple levels of biology in larval and juvenile Norway lobster, Nephrops norvegicus under controlled […]

Offshore platforms, subsea pipelines, wells and related fixed structures supporting the oil and gas (O&G) industry are prevalent in oceans across the globe, with many approaching the end of their operational life and requiring decommissioning. Although structures can possess high ecological diversity and productivity, information on how they interact with broader ecological processes remains unclear. […]

Cetacean distribution in relation to oceanographic features at the Kerguelen Plateau

The Kerguelen Plateau in the south-eastern Indian Ocean is one of the most isolated and understudied regions on earth. As part of the Kerguelen Plateau Drifts project, Marine Mammal Observer (MMO) data were collected during a seismic survey in the austral summer (January–February 2020). Relationships between observation effort, cetacean sightings, seismic operations, and oceanographic variables […] 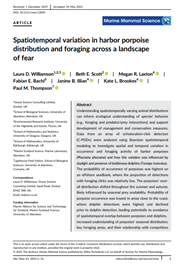