Oil rigs may be fit for porpoise (PDF)

Deep-sea oil rigs are havens for wildlife, according to a survey of porpoises visiting a rig in the North Sea. If confirmed, the findings may prompt a rethink of current regulations governing the fate of platforms in the north-east Atlantic and Europe.

The last report was dominated by the ‘big’ news of Blue Whales Balaenoptera musculus and ‘singing’ Humpback Whales Megaptera novaeangliae off Ireland. It was very opportune timing then for the Bioacoustics Research Program at Cornell University, in the United States, to publish some preliminary results (Technical Report 08-07) from a ten-year period (1996-2005) of monitoring […] 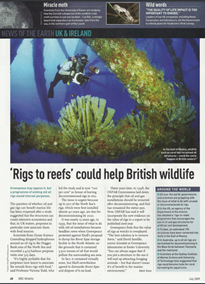 Greenpeace may oppose it, but a programme of sinking old oil rigs would interest porpoises. The question of whether oil and gas rigs can benefit marine life has been reopened after a study suggested that the structures can create extensive ecosystems and that, in UK waters, porpoises in particular now associate them with food sources.

Let’s face it, when it comes to environmental stewardship, oil and gas companies get a bad press. The media have successfully portrayed the worst aspects of this industry, notably graphic representations of wrecked oil tankers, flailing in raging surf and brown foam, against a backdrop of glistening black shores with heart-wrenching images of oil-drenched birds […]

Echolocation clicks of harbour porpoises (Phocoena phocoena) were detected with T-PODs, autonomous, passive, acoustic-monitoring devices, deployed from an offshore-exploration-drilling-rig and gas-production-platform complex in the Dogger Bank region of the North Sea from 2005 to 2006. Echolocation-click trains were categorized into four phases of the diel cycle: morning, day, evening, and night. Porpoises were present near […]

Harbour porpoises (Phocoena p. phocoena L.) are vocal animals and their activity can be monitored effectively using underwater, autonomous, passive-acoustic cetacean-click detectors called T-PODS [e.g. 1, 2, 3]. The characteristics of porpoise-echolocation clicks have been described in great depth over the last forty years [4-10]; clicks can be emitted singularly or in groups known as […]